Beginning August 21st, professional musicians from the Chicago Federation of Musicians will begin a program called Music Helping All Recover Together (M-HART).  Performances will take place across the Chicago Metro area in an effort to return the joy and healing of live music to a weary public.

A kick-off event hosted by the 25th District Chicago Police Department is planned for Friday, August 21st from 3-8pm in the parking lot of the Prosser Career Academy, NE corner of Grand and Central, directly across from the 25th District Police Station, 5555 W Grand Ave. The event will accompany a community food and school supplies giveaway as well as census filing assistance.  The performance is free and open to the public and will feature Fernando Jones’ Blues Trio, The Markus Rutz Quartet, and Jose Valdes’ Latin Jazztet.  Social distancing guidelines will be followed to insure safety.  Secretary-Treasurer Levy of the CFM calls the effort “the soundtrack of the recovery,” and hopes to build a bridge between the public and local law enforcement with the performance.

M-HART is an initiative of the Chicago musicians union created to present live music as an integral part of the emotional and economic recovery of greater Chicago and its own members.   With an emphasis on minority and under-served communities, their goal is to reinstate live music as an essential, healing aspect of civic life.

More than 15 “pop up” concerts will occur during August and September in various Chicago locations and suburban communities including Evanston, Riverside, Berwyn, Bartlett and others.  Performing ensembles will feature union musicians playing a variety of styles including jazz, classical, blues and more. 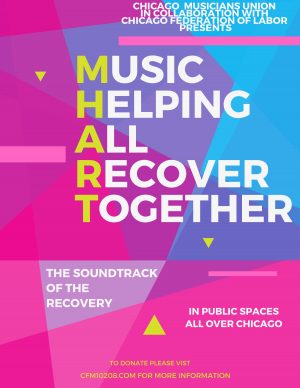